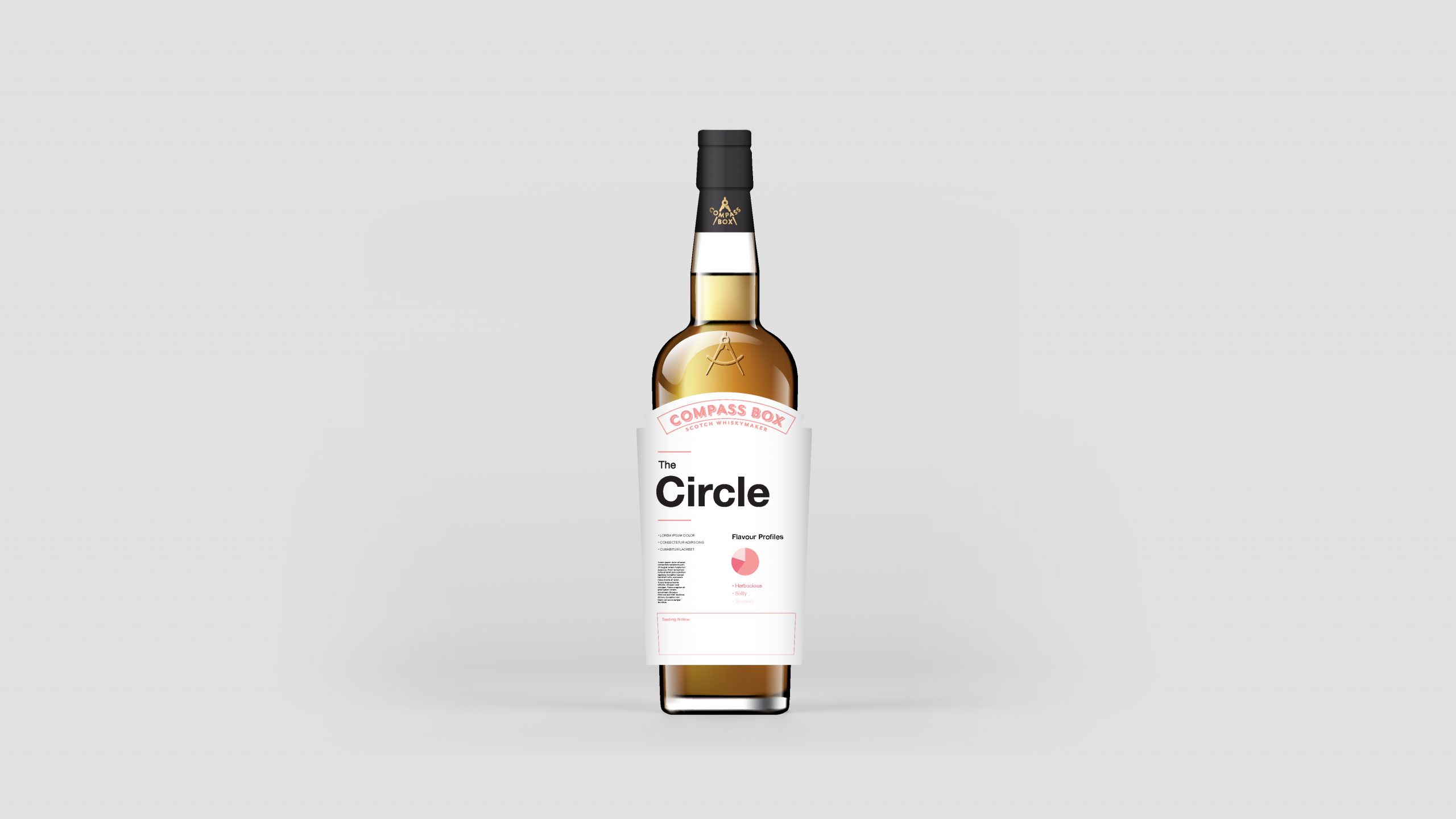 Developing whisky for the next generation.

For the second year, the Compass Box – The Circle competition is in full swing and this time it’s bigger and better than last year! With seven fantastic bartenders from around the world taking part, the competition showcases their talents in the race to develop this years Circle, a blended whisky developed in a collaboration between the winning bartender and Compass Box.

Working with two bartenders, we created very different visuals that summed up their blended whisky. Each was different in taste, smell and colour and the notes and tastes were supported by the visual concepts of the labels and mood board of imagery that we created.

The first was for Mannie Monaghan, owner of Below Stairs in Leeds, who’s blended whisky was herbaceous and savoury in taste and smell. The idea behind this whisky was to encourage experimentation and so we developed a look and feel that took on a lab-style, allowing the user to fill in information on the label themselves and having minimal information on there. Using slight colour and infographics brought more of a clinical dimension to the product.

The second of the designs was created for Rob Scott, General Manager of The Monarchy in Singapore, who’s nostalgia and heritage shone through in his blended whisky with notes of buttery french patisserie and breads along with grain. His French heritage was the focal point for our label design and the deep layers, rustic and earthy colour palette combined with a splash of gold gave this a real homely feel. PreviousAWS Founders Stories eBook
We use cookies on our website to give you the most relevant experience by remembering your preferences and repeat visits. By clicking “Accept All”, you consent to the use of ALL the cookies. However, you may visit "Cookie Settings" to provide a controlled consent.
Cookie SettingsAccept All
Manage consent

This website uses cookies to improve your experience while you navigate through the website. Out of these, the cookies that are categorized as necessary are stored on your browser as they are essential for the working of basic functionalities of the website. We also use third-party cookies that help us analyze and understand how you use this website. These cookies will be stored in your browser only with your consent. You also have the option to opt-out of these cookies. But opting out of some of these cookies may affect your browsing experience.
Necessary Always Enabled
Necessary cookies are absolutely essential for the website to function properly. These cookies ensure basic functionalities and security features of the website, anonymously.
Functional
Functional cookies help to perform certain functionalities like sharing the content of the website on social media platforms, collect feedbacks, and other third-party features.
Performance
Performance cookies are used to understand and analyze the key performance indexes of the website which helps in delivering a better user experience for the visitors.
Analytics
Analytical cookies are used to understand how visitors interact with the website. These cookies help provide information on metrics the number of visitors, bounce rate, traffic source, etc.
Advertisement
Advertisement cookies are used to provide visitors with relevant ads and marketing campaigns. These cookies track visitors across websites and collect information to provide customized ads.
Others
Other uncategorized cookies are those that are being analyzed and have not been classified into a category as yet.
SAVE & ACCEPT